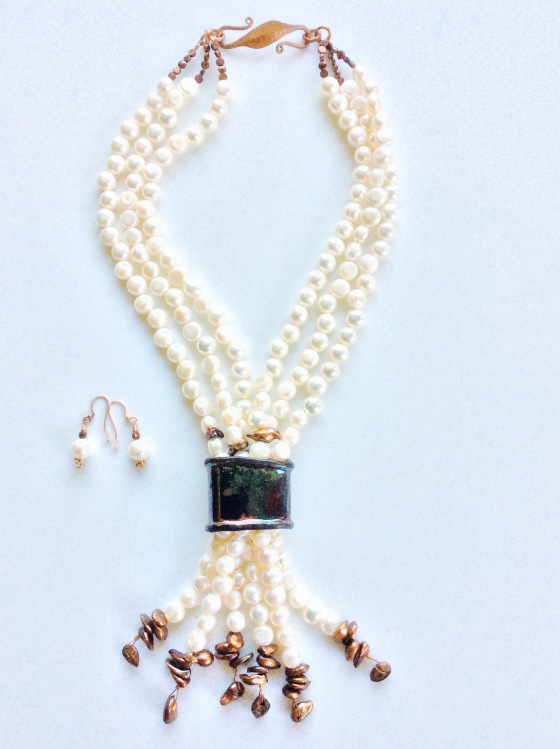 “Tell it a Little More Than it is”

My Chinese Apothecary Chest:   in 1994, it arrived via container to California from Hong Kong, where I discovered beading during my husband’s ex-pat assignment.   Serves as the repository for my beads.  Handcrafted.  It has 52 Drawers, mostly sorted by color.

Once upon a time, pearls were stratospherically expensive. Only cultured pearls existed; think of black Tahitian pearls harvested by divers, or the Japanese Akoya Oyster pearls in those luscious Mikimoto ads.

Ah, the legends: New York jeweler Jacob Driver was said to have sold a rope (36” to 54”)of pearls in the 1890s for $1.5 million.  Pearls were the most valued type of jewel in the Golden Age (See blog dated July 12, 2017 for more of the excesses of the Golden Age.) Jacques Cartier famously bought the NYC mansion where his iconic Fifth Ave store still stands for a double strand of matched pearls valued at $1 million in 1917.

That was then; this is now. In 1979, Japan and the USA developed a method to farm pearls by placing an irritating microscopic object in a mussel, forcing it to develop a nacreous coating over the object.  Freshwater pearls became available to all at reasonable cost.  In the USA, sadly, there is only one still in business, in Tennessee.  China has become the low cost producer and market leader.

“Nacreous” and “iridescent” are the words used to describe freshwater pearls, just like the inside of a mussel shell. There are many colors and shapes.

This necklace features nicely rounded large pearls in a natural white lustre. I wanted to use the copper ceramic piece to hold the pearl strands together, so since six lengths could be jammed in, the resulting necklace has three strands.  I added some dyed copper freshwater pearls in pear shapes as dangles.  And if you look at the clasp end of the necklace, there are some small sparkling glass beads faceted on the top and flat on the bottom—made in the USA for the millinery industry in the 1920s (again, see the July 12 blog!).

The ceramic piece is made by Barbara Hanselman who describes herself as a claysmith. She is smitten with creating in clay and has a fabulous website.  She is based in Cherry Hill, NJ.

This necklace is 22” long and the dangles add 4”.  Copper designer clasp.  Earrings on copper earwires with a pearl and a millinery bead are included.  The set is $149.

Maps and listings available in early August online at www.hullartists.com.

Also baked goods, knit items and ceramics (some practical, some funky),  downstairs where the Community Artists donate all proceeds to the Abbey.

Archives are available back to May 2012 when I started this blog to reflect my new bead life in Massachusetts.  Want a peek at my original website launched in 1999?  Click here to see www.beadleful.com.