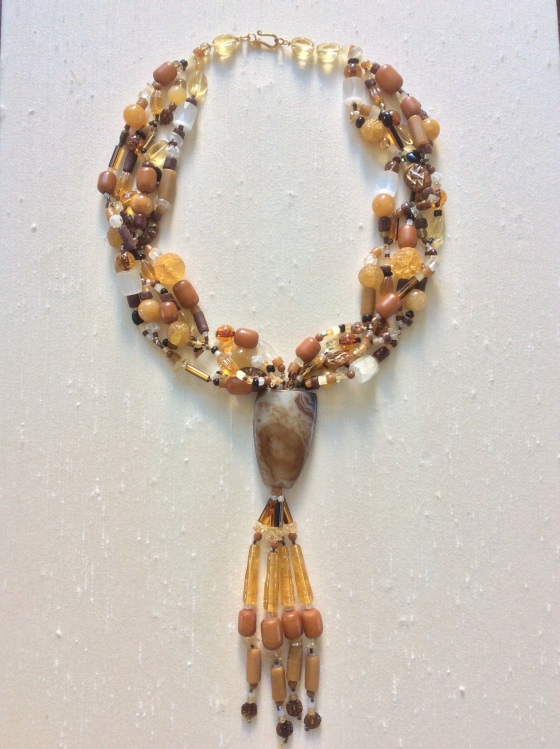 This necklace has many fascinating beads with too many stories, so I shall focus only on the amazing agate stone centerpiece which has two sides and two personalities.  I will list all the beads for my readers’ information.

Agate really is just a stone living in volcanic host rocks discovered in the third century on the shore of a river in Sicily…think Mt. Etna.

Most agates are hollow and in the form of a geode.  Slices like this one are cut from the outside of the geode; the inside is called drusy quartz.   This agate is probably Brazilian identified by its brown color interlaced with white and gray with striking layered bands.  This is high end agate; ordinary agate is found as gravel in streams. 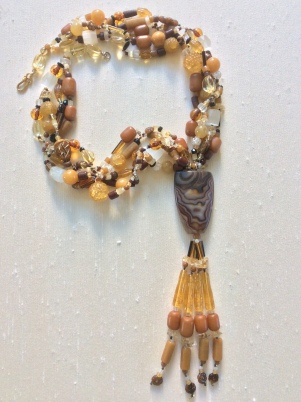 The stone centerpiece pictured here and above inspired this necklace’s colors:  warm and inviting.

It can be worn on either side.

This is a woven necklace with four strands started at the bottom.  The threads were pulled through the agate and then four threads were each loaded with beads, looped through a main bead, knotted, and so on, up each side.  The clasp is vermeil (14k gold over sterling silver).

This necklace measures 21″ plus 7″ for the centerpiece and dangles.  It weighs 6.8 ounces.  It is not heavy to me since it is dispersed over 4 strands. Wear your own gold earrings with it.  $145.

Here is Max, the Labradoodle, now 19 weeks old.  Still a pesky puppy, but doing well in  obedience classes.  He is showing loving traits, follows me everywhere, and loves being outside!

Archives are available back to May 2012 when I started this blog to reflect my new bead life in Massachusetts.