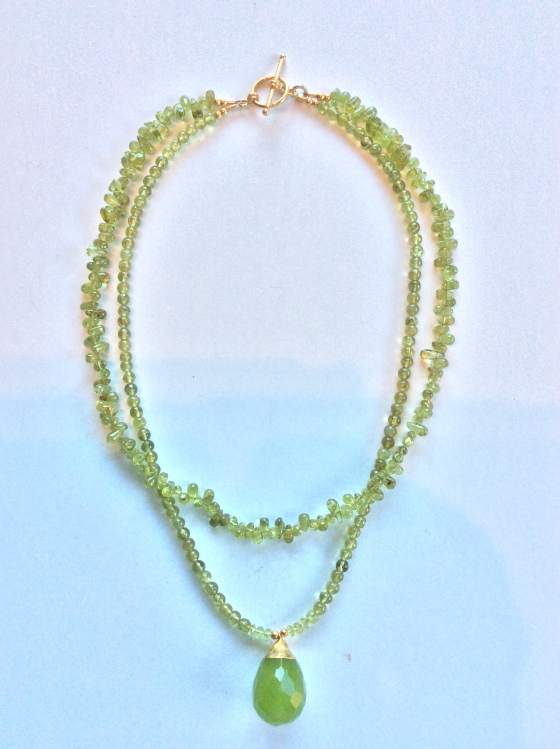 My Chinese Apothecary Chest:   in 1994, it arrived via container to California from Hong Kong, where I discovered beading during my husband’s ex-pat assignment.   Serves as the repository for my beads.  Handcrafted.  It has 52 Drawers, mostly sorted by color.

I took this sweet necklace out of order three drawers ago because it would have been the third green necklace in a row. So, after a short break, here is the notable peridot, August’s birthstone.

Early in the Earth’s solidification as magma cooled to form rock, peridot was born. When magma cools slowly, large and clear specimens are created.  These large chunks were originally thought to be emeralds…sorry, Cleopatra, your prized necklaces were probably peridot!  Today there are no large specimens to mine (except in Burma, and they are blocked from export by the military junta).

The Pharaohs of Ancient Egypt liked peridot so much, they called it the “gem of the sun”. They also had the monopoly on their gem since it was exclusively mined in Zabargad—an island offshore in the Red Sea shrouded in fog.  I read the island “went missing” for several centuries—that thought makes me smile—until 1905 when the mines started up again, unfortunately terminated in 1958 by nationalization.

I love the green tones of peridot. It is classified as a silicate mineral and the less presence of iron in the rock, the deeper the green and the more slowly it cooled 3.5 billion years ago.  Also only stones above 5 carats are dark.  Light ones such as those I use are under 3 carats and found in Arizona, among other places.

When walking on the lava beaches of Hawaii, do you notice the sand sparkles?  The twinkly  grains aren’t sand, but tiny bits of peridot!  Lava is magma!

With all these fascinating stories about peridot, you won’t be surprised to learn it has strong magical powers! It dispels fears of darkness and nightmares.  This is perhaps due to the fact peridot in its natural environ shines in the dark.  It also attracts love and calms anger.

This two-strand necklace features color-matched peridot: one strand is round; the other features small briolettes with some chips at the end.

I added a faceted peridot briolette with a vermeil* bail, seed beads and clasp. Wear your favorite gold earrings with this necklace which measures 18”.  $99.

Maps and listings available in early June at Hull businesses and online at www.hullartists.com

Archives are available back to May 2012 when I started this blog to reflect my new bead life in Massachusetts.  Want a peek at my original website launched in 1999?  Click here to see www.beadleful.com.